As active local nature lovers, gardeners and environmentalists, concern was raised among the retired homeowners that endangered plant species might be at risk.

It was with great excitement that orchids were confirmed as growing in an area by the pond.

She has also found Campion growing in the wilder areas around the retirement village and a patch of the much rarer Ragged Robin. 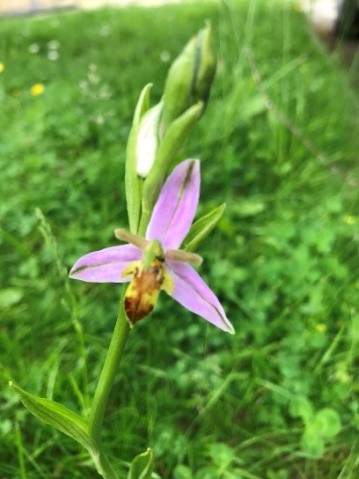 Luckily, the village has ecological experts on hand, who identified specific species and confirmed villagers’ suspicions.

Jon Davies, a Woodchester Valley Village director and son of one of the residents, is a re-wilding expert.

He has identified 41 orchids growing in the grounds.

The Common Spotted Orchids and Pyramidal Orchids are in flower, as well as the much rarer Bee Orchid.

The gardening team from Down To Earth, Stroud, which provides environmental gardening services and runs several community projects across Gloucestershire, maintains the site and works in partnership with the Village to encourage its natural beauty and diversity.

“This is a great example of working with nature,” Jon enthused.

“These are simple steps that every keen gardener and budding ecologist can take.

“I’m delighted that no mowing happened in the area during April and May and now many Common Spotted Orchids and Pyramidal Orchids are in flower, as well as one individual of the much rarer Bee Orchid, for everyone to enjoy.”

Although visitors may not realise it from the stunning gardens and woodland, Woodchester Valley Village is built on a brown-field site.

The mutually owned Woodchester Valley Village was built on the site of a demolished mill.

So the orchids have risen from rubble.